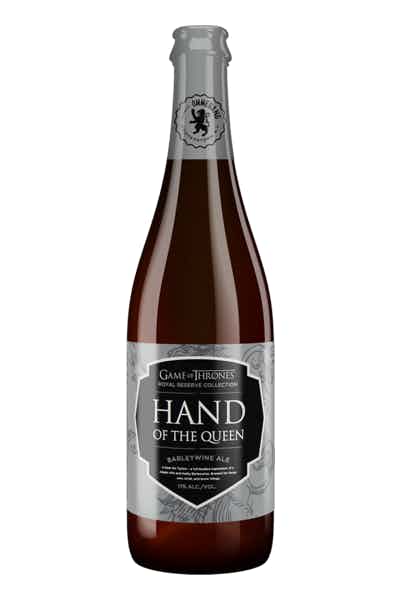 Ommegang Game Of Thrones Hand Of The Queen

We’re excited to announce that our new Game of Thrones-inspired Royal Reserve Collection launches in 2018! The first of four beers in the collection is Hand of the Queen, a big, bold barleywine brewed for Tyrion Lannister. It will be available only in the United States beginning in April. A list of distribution states will be available in March of 2018 when the beer starts shipping to our wholesalers. Details about the collection and the first beer are below in the press release. Cheers! Brewery Ommegang and HBO announce launch of Game of Thrones®-inspired Royal Reserve Collection this spring As Game of Thrones approaches its final season, Brewery Ommegang and HBO Global Licensing are excited to announce the launch of the Royal Reserve Collection, a collectible series of four special, limited release beers, each designed and brewed as an homage to one of four epic figures in the battle for the Seven Kingdoms. Packaged as a series, with simple, elegant iconography and sophisticated design representative of select Westerosi houses, each beer will be brewed and blended with ingredients selected to match the character and temperament of the chosen hero, designed and brewed as Brewery Ommegang’s interpretation of what a royal brewer might brew for his or her noble master. The first beer in the series is Hand of the Queen, a beer brewed for Tyrion Lannister. As one who knows a great many things, Tyrion knows and loves wine above all else, so Hand of the Queen is a big, bold barleywine, a beer fit for those who seek knowledge and truth, both great and small. Available throughout Ommegang’s distribution network beginning in April, Hand of the Queen will be offered both on draft and in 750ml bottles. The suggested retail price for a bottle is $12.99. “While technically not royalty at all, Tyrion certainly qualifies as a nobleman in our esteem,” says Doug Campbell, President of Brewery Ommegang. “We’ve wanted to brew for Tyrion for six seasons, and we believe his time has come. Knowing his preferences, our beer for Tyrion could only be a barleywine.” “Ommegang’s collection of Game of Thrones beers has been an enduring hit with our fans, so we’re excited to offer them even more opportunities to pay tribute to their favorite characters next year by releasing four new and special releases,” says Jeff Peters, Vice President of Global Licensing at HBO. “And, of course, who better to receive our first tribute than Tyrion, the man who so famously drinks and knows things.” Brewed with a complex blend of specialty malts and carefully-selected old-world hops, Hand of the Queen is a rich, full-bodied version of a classic barleywine and comes in at 10.7% ABV. Malt forward and multifaceted, the beer balances the intense flavors of brandy-soaked raisins and dark fruit with the lighter notes of apricot. Hints of molasses and toffee are evident before a finish characterized by the classic yet distinctive barleywine alcoholic heat. Hand of the Queen, an old-world example of the style, attempts to balance these strong yet unruly opposing forces, much like the way Tyrion maintains the balance of power among his influential contemporaries in Westeros. The Royal Reserve Collection will feature four brand new beers in the brewery’s Game of Thrones-inspired series with HBO. All of the beers will be available on draft and in 750ml bottles and they’ll launch in April, July, October, and December for 2018. Details and images of future beers will be announced throughout the year.