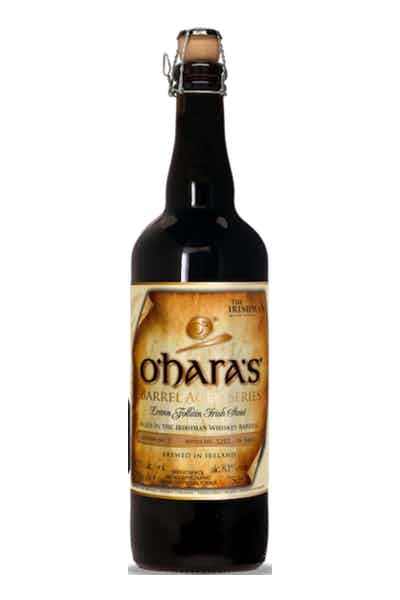 Where the essence of select whiskey barrels combines with O’Hara’s award winning beers. In 2012, we embarked on a new series of beers, barrel aging our beers in select whiskey barrels that we felt would match and balance well with any one of O’Hara’s beers. Awards / accolades for our highly acclaimed Barrel Aged Leann Folláin include Trophy winner at the Irish Whiskey Awards 2015 (October), Concours M Biere Pierre Celis Platinum Medal winner at Mondial de la Bière 2014 in France and Gold Medal winner at the Irish Whiskey Awards 2014. The fifth edition of our O’Hara’s Barrel Aged Series introduces our new cork and cage bottling for bottle conditioned beer, which allows fermentation to occur inside the bottle. To craft this beer we fill casks which were previously used for Irish Whiskey with our full bodied and rich O’Hara’s Leann Folláin Extra Irish Stout. The stout is aged in oak Irish Whiskey barrels where it picks up the flavours of whiskey and oak cask. After aging we then bottle condition the beer to give a gentle carbonation, bringing out the best of both the stout and the whiskey.