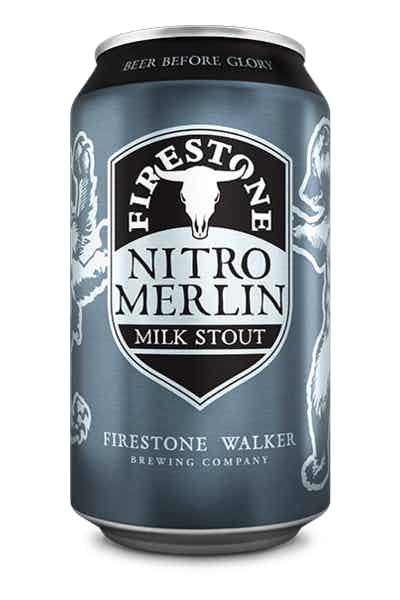 Dark, creamy and impossibly smooth. Just pour as directed and behold the magic that we call Nitro Merlin Milk Stout.

It’s often the case that beer names serve only to confuse (cream ale doesn’t contain cream, for instance) — but milk stout is honest advertising. It’s a dark beer brewed with lactose, which is a sugar found in milk. Because lactose doesn’t ferment in the presence of beer yeast, it retains its creamy quality and imparts a mild sweetness to this libation. Or, you know, a lot of sweetness if the brewer’s got a sweet tooth. In general, you can expect a milk stout to be sweeter than your average stout like Guinness.
Milk stouts are thick, dark, creamy and have very little carbonation. They carry decadent notes of chocolate, espresso and sweetened coffee, but don’t be afraid — they’re not sickeningly sweet like some canned coffees you’ve probably tasted. Think of them more like that pleasant, farm-fresh sweetness of whole milk. They’re certainly sweeter than other stouts like Guinness, dry stouts and oatmeal stouts. Dark-roasted grains impart a rich, dark color to the beer, as well as imparting the aroma of caramel and chocolate.
Common to popular belief, milk stout is not exceptionally high in alcohol; the misconception here appears to arise from the fact that many other stouts are high in the ABV department. While it’s true that many stouts are known as big beers, milk stout is relatively mild at around 4% to 6% alcohol by volume (ABV). Luckily, there’s no sacrifice in flavor in this lower ABV. These beers are dark, creamy and rich. Plus, they feature coffee, caramel, chocolate and espresso notes. There’s also a subtle sweetness imparted by the lactose, which doesn’t ferment when exposed to beer yeast.
It used to be that asking a bartender for a gluten-free milk stout earned you the same look as asking a medieval blacksmith if he accepted Dogecoin. But innovations continue to amaze beer lovers and one of them is the emergence of gluten-free milk stout. Instead of being made with malted barley (a key ingredient in traditional stouts), some gluten-free milk stouts are made with pale millet malt, caramel and roast rice malts.
Milk stout, like other stout categories, is an ale. Ales are differentiated from lagers by several factors. One is the type of yeast used — ales are made with top-fermenting yeast, which requires warmer temperatures between 60°F and 70°F. Lagers, on the other hand, use bottom-fermenting yeast in colder temps between 35°F and 50°F. Another difference is the color and flavor. Ales like milk stout tend to have fuller bodies than lagers and the use of roasted malts gives it its dark color.
A 12 oz. glass of milk stout will have around 230 calories and 10 grams of carbohydrates. Compare that to your average 12 oz. glass of beer, which carries 150 calories and 13 grams of carbs. For that extra calorie count, you’re getting a stout that’s creamy, sweet and full, with notes like sweetened coffee, espresso and chocolate. The use of lactose in the fermentation process imparts the stout with its characteristic sweetness, while the roasted malts give it its dark color and rich aroma.
Enter a delivery address