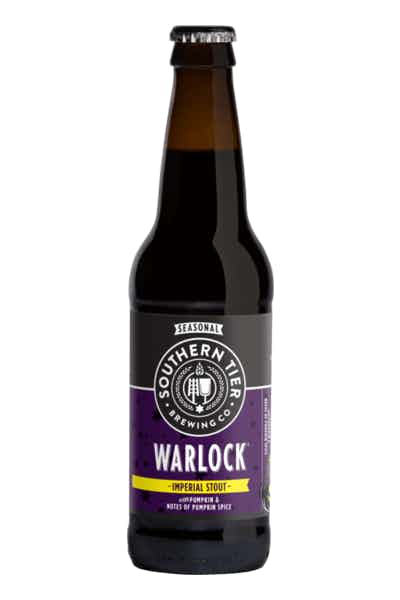 Warlock is brewed to enchant your palate on its own & also to counterpoint our Imperial Ale, Pumking. Make your own black magic by carefully pouring this Imperial Stout into a goblet. Dark and mysterious, reanimate your senses with Warlock’s huge roasted malt character, moderate carbonation & a spiced pumpkin pie aroma. Food Pairing: -Spicy BBQ -Smoked & roasted foods -Carrot cake or as a float with vanilla ice cream

Imperial stout first originated in England, though it was not for the British monarchy — it was brewed for Russia’s Peter the Great. This beer has a higher alcohol by volume (ABV) level than most English stouts. Whereas normal stout is dark, strong and served at a medium temperature, the imperial stout is in a category all its own. It’s heavy on the alcohol (usually around 14% ABV), and the term “imperial” can be taken to simply mean “big:” big on the alcohol, big on the flavor. Sometimes imperial stouts are simply called double or strong, as they’re made with extra amounts of hops and grains.
Imperial stout is an intensely flavorful beer with a rich profile and plenty of complexity to explore. Though different brewers create different iterations, you can expect a wide range of roastiness in these beers, with malt tones that match the color. Hops are quite prominent (how else do you think they get to the average 14% ABV?), and you’ll likely pick up on some fruity esters. Then there are the flavors like coffee, chocolate, dark fruits and burnt grain. That high alcohol content isn’t just for kicks — it contributes to the warmth and the finish of this fantastic beer.
Imperial stout lives up to its glorious name with an average 14% alcohol by volume (ABV) level. That’s pretty darn high for beer, which averages around 5% for standard brews. That high alcohol content could be interpreted to have given the imperial stout its name, though, in fact, the beer was first brewed in England to honor Peter the Great of Russia. Imperial stout is a rich, complex beer that’s got tons of flavors lying in wait for you. And a charming alcohol warmth, of course.
Who would have ever thought that Imperial Stout would one day be gluten-free? Well, that day has arrived. Certain breweries are offering delicious, gluten-free Imperials that lean on millet, buckwheat and rice as their base ingredients. This sets them apart from traditional Imperial Stouts, which not only use grain but also use a double dose of grain to achieve a higher alcohol content. Gluten-free options deliver all the intricate flavors and high alcohol content without triggering gluten sensitivities.
Imperial stout, like other stouts, is a dark ale made with the use of top-fermenting yeast. These yeast prefer to do their work in warmer temperatures, typically between 60°F and 70°F. This separates them from lager yeast, which is a bottom-fermenting breed that works at colder temperatures between 35°F and 50°F. Imperial stouts often use a base of pale malts plus generous dashes of other malts — things like roasted barley, chocolate and black patent (for color and roasted aroma).
Imperial stout packs a whopping punch at 250+ calories and 2+ grams of carbs per 12 oz. serving. That’s not too light, considering regular beer weighs in at 150 calories and 13 grams of carbs per serving. However, consider what you’re getting for that extra calorie/carb count. You’re getting notes of chocolate, coffee, burnt grain and dark fruits. You’re getting hops and malt tones in an extraordinarily rich, complex body. Oh yeah, and you’re getting a staggering 14% alcohol by volume (ABV) to top things off. All for 257 calories and 21 grams of carbs … not so bad after all.

Brewed with pumpkins, Southern Tier® Warlock Imperial Stout is a tasty drink that rekindles your senses. With low to moderate bitterness and 8.6% ABV, this drink pours a deep black color with a thick, brown head that dissipates quickly. The distinct aromas of pie crust, cinnamon, ginger, caramelized sugar and molasses give this Southern Tier Warlock beer a warm appeal. A full-bodied stout, this brew has bold malt character with a strong flavor of pumpkin pie, making it a treat for those who love all things fall and pumpkin. Enjoy the silky finish of this beer with subtle sweetness and hints of coffee, dark chocolate and spices like cinnamon and clove. As you sip the Southern Tier imperial ale, the flavors come through in layers, making it a complex beverage.

The roasted malty profile of this brew brings out the bold flavor of spicy grilled and smoked meats and roasted vegetables. Serve this craft stout with fall desserts, including pumpkin or pecan pie and carrot cake. Grab a bottle of this pumpkin-flavored imperial stout by clicking these handy links to search for Drizly in your city and look for liquor stores on Drizly near you.

-This 8.6% ABV beer is pumpkin-spice flavored
-Features a bold roasted malt profile with hints of spices and molasses
-Pairs well with spicy grilled and roasted meats
-Matches with fall desserts like pumpkin pie or carrot cake