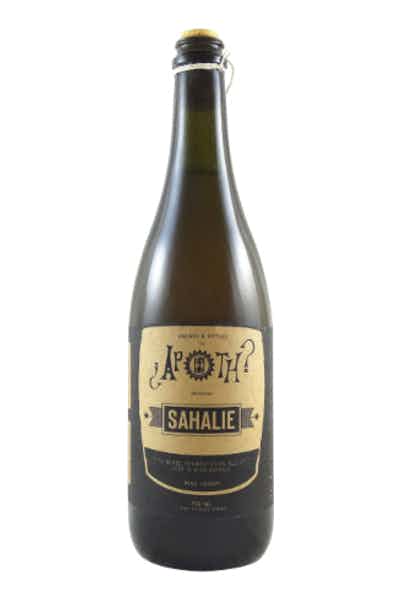 Sahalie is the flagship brand of The Ale Apothecary, brewed year-round of malted barley & wheat and Goschie Farms Cascade Hops. Hop bitterness and acid produced by our house lactobacillus culture provide the balance to the malt and oak structure of the beer. She spends up to 1 year in our oak barrels during a long, relaxed fermentation prior to a month-long dry-hopping (yes, in oak barrels!). Our sensory experience is a tropical & citrus fruit nose of apricots, pineapple, and orange produced from yeast esters and hop oils. The palate is tart and pithy, combining earthy and herbal undertones that evolve as the beer warms & opens up within your glass.

Wild ale is a sour beer made using wild yeasts and bacteria, as well as traditional brewer’s yeast. These wild bugs often produce funky additions like lactic acid, acetic acid and other substances that contribute to wild ale’s sour flavor. These bugs also add other notes to wild ale, such as horse blanket, barnyard and hay (don’t worry, it’s much more appealing than it sounds). American wild ale refers to such beers brewed with wild yeasts and bacteria found in the United States, but wild ales can come from many places around the world.
Wild ale has a sour, funky flavor profile that comes from the unique combination of wild yeasts and bacteria used in addition to the standard fermentation yeast. These wild organisms produce things like lactic acid, acetic acid and other acids that create a sour flavor, as well as earthy characteristics like barnyard, hay, Band-Aid and animal flavors. Wild ales often also include fruity flavors like apricots, which help balance out this sour brew's acidity. There's also a pleasant warmth to wild ale with an alcohol by volume (ABV) between 6% and 10%.
Wild ale contains between 6% and 10% alcohol by volume (ABV). That alcohol content contributes to the beer’s complex and fascinating flavor profile, which is made sour by the use of wild yeasts and bacteria. An ABV between 6% and 10% makes wild ale a bit stronger than the average beer, which typically weighs in at 5% ABV.
Wild ale is traditionally not gluten-free. That’s because wild ale, like other ales, is brewed with a base of grain (often barley) that’s chock full of gluten. What sets wild ale apart from its less-wild cousins is its use of feral organisms outside of the traditional Saccharomyces cerevisiae brewer’s yeast. These organisms contribute things like lactic acid and acetic acid to the beer, giving it a sour taste as well as adding earthy flavors like barnyard, hay, horse blanket and Band-Aid. So while gluten is a pretty big part of wild ale, keep your eye on smaller craft brewers who put out gluten-free versions of beers.
Wild ale is indeed an ale, and the reason comes down to how it’s made. The two primary categories of beers are ales and lagers — ales are made using top-fermenting yeast in warmer temperatures, typically between 60°F and 70°F. Lagers use yeast that fermented from the bottom and operate in much colder temperatures between 35°F and 50°F. The result for wild ale is a deliciously sour, earthy beer that carries a wide range of flavors.
Wild ale tends to be an extremely light beer, packing less than 100 calories and 8 grams of carbs in each 12 oz. serving. That’s significantly lower than your average 12 oz. glass of beer, which has 150 calories and 13 grams of carbs. Wild ale is made using naturally occurring yeast and bacteria (beyond the typical brewer’s yeast). These organisms impart a tart sourness to the beer while also gracing it with earthy flavors — think barnyard, hay, horse blanket and Band-Aid (so yeah...an acquired taste for some). Wild ale takes you on this wild tastebud journey while using around 60% of the calories and carbs of regular beer. Not bad.
Enter a delivery address