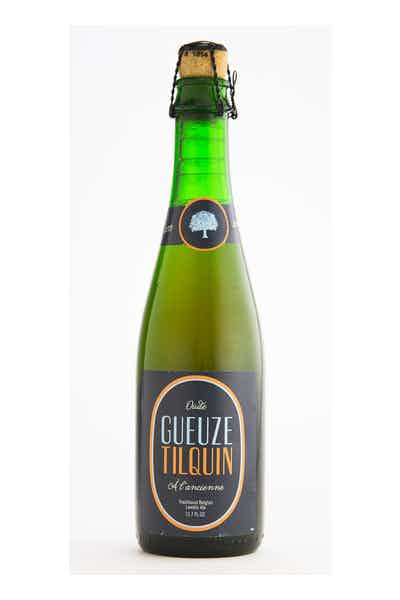 Oude Gueuze Tilquin à l’Ancienne (6.0% alc/vol) is a spontaneous fermentation beer, produced from the blending of 1, 2 and 3 years old lambics. It is unfiltered and unpasteurized, and refermented in the bottle for at least 6 months. The lambics used were fermented and oak aged in our installations. These lambics are coming from worts brewed by Boon, Lindemans, Girardin and Cantillon breweries.

You may wonder — how does one even wrap the tongue around that many vowels — but the Belgian gueuze (not to be confused with the German gose) is pronounced like “goo-zah.” However you say it, this is one funky, sought-after brew; gueuzes are a member of the lambic family of beers and as such, deliver a uniquely appealing sour profile. A gueuze is actually a blend of young (aged one year) and older lambics (three years); much like craft distillers in the bourbon and whiskey industry, the art of blending lambics to craft gueuze is a tradition that is perfected and shared over generations.
To create a gueuze, master blenders carefully combine young, acidic lambics with the more mellow, aged varieties and allow them to re-ferment together; the final result is an almost Champagne-like mouthfeel and a dry, musty, earthy and cider-like taste — some even call gueuze the Brussels Champagne. The unique sour taste comes from the wild yeast and bacteria that feed on the unmalted wheat and malted barley in a lambic’s wort (a method called spontaneous fermentation). There is very little residual sugar in a gueuze though, whereas many lambics — particularly the fruit varieties — have a gentle sweetness underneath their initial sour flavor.
The alcohol content in lambic-style beers varies depending on the style, with many fruit lambics containing an alcohol content as low as 2% and most gueuzes falling somewhere in the range of 5-8% alcohol by volume. Brasserie Cantillon, a well-known Belgian lambic brand that you can find more easily in the United States, makes a classic, hazy gold gueuze with a 5% ABV. For those who enjoy sour beers but would appreciate a heavier alternative to the session-style varieties on the market, the gueuze delivers a surprising amount of complexity behind the initial acidic sip and provides an alcohol content closer to, say, a craft IPA.
The art of making lambics and blending them to craft gueuze is a well-respected tradition in Belgium, and many beer purists balk at the thought of substituting gluten-free grains or attempting to tinker with the recipe. Lambic-style beers use a base grain bill of unmalted wheat (typically between 30-40%) and malted barley; both ingredients contain gluten and lend to the overall complex flavor. You may be able to track down a gluten-free lambic (in fact, Dogfish Head Brewery offers a gluten-free fruit lambic made with sorghum instead of barley or wheat), but you’ll be hard-pressed to find a readily-available, gluten-free gueuze.
With its funky, musty flavor and aged qualities, Gueuze is more often compared to a Champagne than it is a traditional ale or lager; nonetheless, lambics and, therefore gueuzes are considered a Belgian-style of ale. Traditional ales rely on carefully cultivated strains of ale-specific yeasts, which ferment at the top of the warm, sugary wort instead of sinking to the bottom — as lager yeasts do. The boiled wheat and barley in a lambic is left exposed to Mother Nature, allowing wild yeasts and bacteria to feed on the wort instead, leading to the signature sour, earthy flavor and strong, fruity aromas.
A gueuze’s flavor depends largely on the wild yeasts, aged hops, lactic acid and overall blending of young and old lambics; there are traditionally no extra flavors added, unlike the sweeter fruit lambics more widely available (of which many surpass 200 calories). As such, the nutritional content in a standard, 5% ABV gueuze is somewhat reasonable — typically, a 12-ounce serving from a common lambic brand like Lindemans or Cantillon contains 150 calories and 15 grams of carbohydrates. As modern brewers continue to expand the style, increasing ABVs and experimenting with new ingredients (maple syrup or honey), you’ll also find higher calorie and carbohydrate counts.
Enter a delivery address