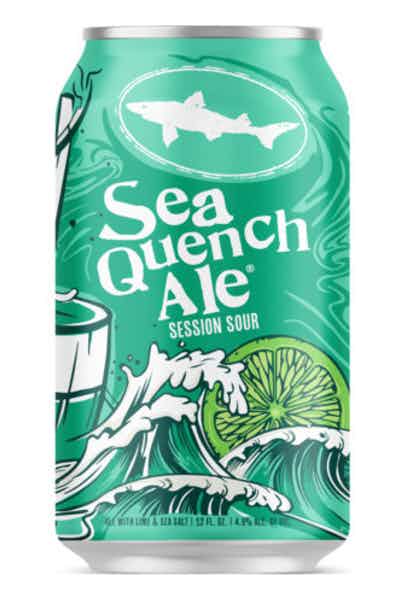 Objectively the most thirst-quenching beer we’ve ever brewed, SeaQuenchAle is a session sour mash-up of a crisp Kölsch, a salty Gose and a tart Berliner Weiss brewed in sequence with black limes, sour lime juice and sea salt. The result? A citrusy-tart union that has captured the attention and hearts of beer, wine and margarita drinkers alike!

A gose (pronounced like “go-zuh”) is the counterpoint to the American craft IPA craze; low in ABV and only mildly hoppy, beers in this category have a higher salinity (i.e., salty). The style comes from Goslar, a small central German town through which the Gose River flows — it should be noted that the original recipes likely did not contain salt, rather, the mineral-rich German waters lent the beer its signature taste. While the style fell out of vogue after the World Wars, craft brewers have brought the gose style back with a vengeance; you can likely find at your local liquor store.
Gose beers are crafted in a similar fashion to other German sour styles (e.g., Berliner Weisse); brewers use a spontaneous fermentation method combined with added bacteria to create its unique, tart but not too sour profile. Brewers also add sea salt and often citrus and coriander to the recipe, further developing the flavors; it’s definitely a unique brew, but its wide appeal demonstrates that there are plenty of beer-lovers who need a break from the super-bitter, hopped up IPAs crowding the taproom menus. Serve gose at just above refrigerator temps (around 40-45 degrees Fahrenheit) which keeps the citrus and salt refreshing and doesn’t dim the overall flavor by being too cold.
Gose falls into the session beer category, meaning it’s ideal for a daytime brew — the bright citrus and sea salt do pair well with a day at the beach after all. You can expect the majority of gose beers you find to fall somewhere between 4-5% ABV.
A traditional gose is considered a wheat beer, and as such, is not a gluten-free product; wheat beers typically contain more gluten molecules than other styles of beer. The grain bill for a gose is often at least 50% malted wheat (though some traditional German recipes might even suggest an entirely wheat mash). It can be a little complicated to make a close substitute of a gluten-free gose, but some brewers are up to the task; successful versions use a gluten-safe grain blend of ingredients like buckwheat, millet and quinoa and lean heavily on the sea salt and citrus ingredients to bring out the gose’s signature flavors.
Gose-style beer is considered a type of ale, as brewers often employ some standard top-fermenting ale yeasts in their process; it should be noted, however, that traditional gose recipes use a method called “spontaneous fermentation,” which relies on wild yeasts to ferment the brew instead of the intentionally added ale-specific strains. This unique fermentation style combined with the added bacteria and sea salt creates the gose’s signature sour flavor. As far as European ales go, the gose is light, tart and refreshing, especially when you consider the more malt-forward, amber ales and Belgian ales you’d typically expect from the region.
Gose beers are surprisingly low in calories and carbohydrates when compared to other wheat beers and fruit sours; a typical gose relies on low- or zero-calorie ingredients for its distinct flavor: lactic acid, salt, citrus and coriander. The majority of the calorie content comes from alcohol, and most gose beers remain below a 5% ABV. Gose is considered a style of session beer, a category that defines brews designed for easy drinkability and refreshment.
Enter a delivery address