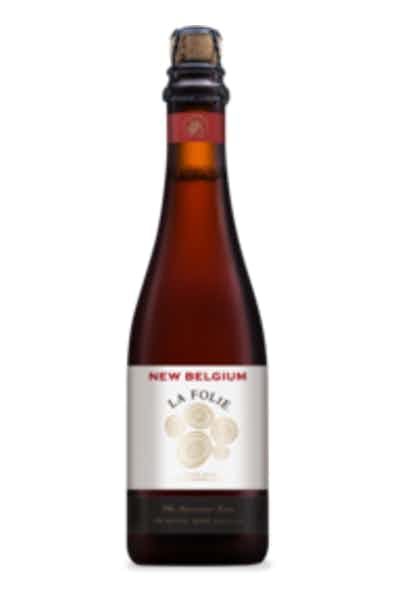 La Folie, French for "the folly," is a beer steeped in New Belgium brewing tradition. This wood-aged, sour brown spends one to three years in big oak barrels known as foeders. And when the beer finally hits the glass, La Folie is sharp and sour, full of green apple, cherry, and plum-skin notes. Pouring a deep mahogany, the mouthfeel will get you puckering while the smooth finish will get you smiling. Not a beer for the timid, La Folie is a sour delight that will turn your tongue on its head. Find out why it's considered one of the best sour beers around.

Flanders Red and/Brown ales are a type of sour ale that comes from West Flanders, Belgium. What sets this lovely ale apart from others is the use of far more microorganisms than are found in conventional brewer’s yeast. Flanders ale uses organisms beyond the standard Saccharomyces cerevisiae found in most beers — in particular, it employs an organism that produces a sour, lactic acid-like character. Combined with the low hop levels and Pils malts, this creates an ale that’s delicious from start to finish.
Flanders ale is a well-balanced ale that’s full of character — the most notable element being its sourness, which ranges from medium to strong and comes from the distinct organisms used for fermentation. You may notice a cherry-like flavor or a malty character that can contribute sweetness, cocoa and bitterness all at the same time. A fruitiness is almost guaranteed. This fruitiness will likely match the aroma and can contain notes of raisin, raspberry, prunes and plums, along with spicy orange. Tannins are fairly common in Flanders ale.
Expect Flanders ale to hover somewhere between 5% and 6.5% alcohol by volume (ABV). Compare that to your average beer’s ABV of 5% and you can see that Flanders ale is doing a good job keeping up with the Joneses. That alcohol level also plays a large role in the exquisite flavor profile of this ale, which Michael Jackson — the highly respected beer author, not the one you’re thinking of — considers among the most refreshing beers ever made.
No, Flanders ale ale is not gluten-free. That’s because it’s made with malts — malted barley, to be specific — which is gluten-packed. Red malt is used in Flanders ale to impart the characteristic color. What sets Flanders red ale apart is that it’s fermented with Lactobacillus instead of your typical fermentation organisms. This produces lactic acid, which is what gives it its sour character. That sour punch also comes from the long aging periods this beer spends in oak barrels.
Flanders ale is the ale to end all ales — a true, authentic West Flanders, Belgium ale that’s full of character and an intricate flavor journey. What separates an ale like this from lagers is that ales are made in warmer temperatures (usually between 60°F and 70°F) using top-fermenting yeast, while lagers are made in cold temps (think in the 35°F to 50°F range) using bottom-fermenting yeast. And while today’s brewers often blend both styles interchangeably, Flanders falls firmly in the ale category.
You can expect a 12 oz. glass of Flanders Red/Brown to contain about 183 calories and 15 grams of carbs. Compare that to your average beer: a 12 oz. glass of beer usually comes with 150 calories and 13 grams of carbs, meaning Flanders ale is a bit on the high side but isn’t anything you should feel too guilty about. For that calorie/carb price, you’re getting an incredibly refreshing, fruity beer with tons of character.
Enter a delivery address