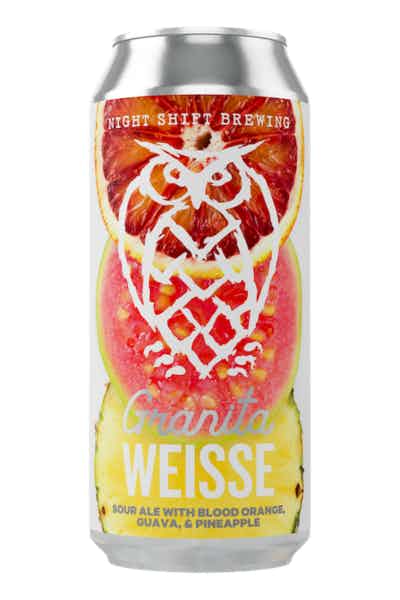 SEASONALLY ROTATING - These mixed fermentation sours are tart and packed with an abundance of real fruit in every can. The recipe uses both lactobacillus and brewer’s yeast during fermentation to achieve a high level of complexity. Seasonally rotating recipes! **Product availability may differ from the image shown, and varies based on brewery production and retailer inventory. Please contact customer support with any questions.**

Berliner Weisse is a wheat beer that’s sour, refreshing and relatively low in alcohol. What sets this beer apart is its tart flavor, which it achieves thanks to the use of lactic bacteria and a special traditional yeast strain. It’s been brewed in northern Germany since the 16th century, though by the late 1800s, it was Berlin’s most popular alcoholic beverage. Just a century later, only two Berlin breweries still produced it. It’s made using malted barley and wheat — though the malted barley must be kilned at low temperatures to prevent excessive color.
The most distinct note of Berliner Weisse is its sourness, which comes from the use of lactic bacteria and a specific yeast strain. This wheat beer is cloudy and refreshing on its own, though tradition allows for the addition of raspberry or flavored Woodruff syrup. There’s very little hop taste to speak of. In the United States, brewers often take extreme creative liberties with fruit additions, adding fruits at different stages of the brewing process and treating the Berliner Weisse much like a cocktail base.
Your average Berliner Weisse has a low alcohol content between 2.0% and 5.0%, though most brews will land somewhere around 3.0%. Compare this to your average beer, which has around 5.0% alcohol by volume (ABV). This makes the Berliner Weisse fairly easy on the body and a great casual beer, as chuggable as it is sippable. Though once only produced in northern Germany, today Berliner Weisse is produced worldwide, resulting in a wide range of different ABV ratings.
Traditionally, Berliner Weisse is not gluten-free. And while very few beers naturally make it easy to create gluten-free doppelgangers, the Berliner Weisse is one such beer. In fact, while sorghum syrup’s sour flavor profile seldom makes for a desirable flavor profile in most beers, it makes it perfect for Berliner Weisse. Gluten-free Berliner Weisse options are often made using millet as the primary grain, as well as with buckwheat and rice. Enjoy this traditionally gluten-packed beer gluten-free for the first time ever.
Through most of its production history, top-fermenting ale yeast was the weapon of choice in spite of the massive popularity of bottom-fermenting lager yeast in Europe in the 1800s. Like many early ales, Berliner Weisse fell victim to the popularity of lagers — it nearly vanished by the year 2000 and is only making a comeback in recent years.
If a 12 oz. glass of Berliner Weisse comes sliding across the hardwood into your outstretched hand, you can expect it to pack around 188 calories and 11 grams of carbs. That’s not half bad, considering your average beer contains 150 calories and 13 grams of carbs. In fact, Berliner Weisse is so intensely drinkable because it’s not only light on the carbs, but it’s also light on the alcohol. Most Berliner Weisse has an ABV between 2% and 5%.
Enter a delivery address