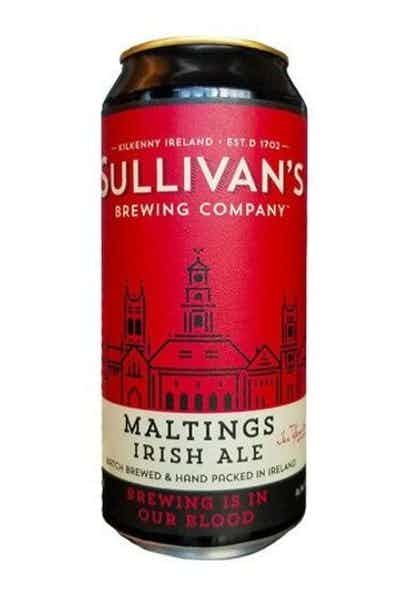 Enjoy The Canned Version Of Our Maltings Red Ale. A Classic Ruby Ale With Deep Malt Combining Rich Biscuit And Gentle Caramel Notes. We are the 1st Irish Brewing Company Ever to win a World Champion Keg trophy at the International Brewing Awards - known as “the Oscars of the Beer World”. The competition hosts over 1200 beers from 50 countries, and Sullivans Maltings Ale is the first ever win of it’s kind for an Irish Brewing Company, in the competition's 131 year history. This is a very special beer...enjoy!!

Irish red is an ale made from kilned malts and roasted barley. As delicious as it is balanced, this beer’s characteristic red colors come from these ingredients. Its strength tends to rest between 4% and 4.8% alcohol by volume (ABV), though you can certainly find craft Irish Reds that are as high as 6%. Expect a hoppy bitterness that rests on the palate and a medium malt sweetness and notes of toffee, caramel and butter.
When you taste an Irish red, expect a well-balanced flavor profile that features a beginner-friendly hoppy bitterness, a caramel malty sweetness and notes of toffee and butter. The Irish red is brewed with roasted barley and kilned malts, which serve not only to influence the flavor but also to add that glorious red hue to the beer. The roasted barley creates a low, roasted flavor that resembles toastiness. There’s also the flavor of butter thanks to diacetyl. Adjuncts like rice, corn and sugar help reduce the beer’s body and lighten its finish.
Irish red ale has an alcohol by volume (ABV) rating that hovers between 4% and 6%, depending on the brand and drink. You can expect most Irish reds to have an ABV of 4% to 4.8% — but it’s the creative contributions of craft brewers in recent years that have bumped those numbers up to the 6% mark.
Traditionally, Irish red has not been a gluten-free offering. That’s because Irish red is, by definition, made with roasted barley and kilned malts. These are responsible not only for their sweet caramel and buttery, hoppy flavor but also for their beautiful red color. In spite of this, brewers are beginning to create gluten-free offerings.
Irish red can be brewed either as an ale or a lager. The difference lies in a number of factors, the most important being the type of yeast used. Ale yeast ferments from the top down and operates in warmer temperatures (typically between 60°F and 70°F). Lager yeasts take longer to ferment and do so from the bottom of the brew — furthermore, they work in cold temperatures between 35°F and 50°F. Because Irish red walks the line between ale and lager, it can feature a variable hoppiness and a sweet, malty caramel flavor.
Expect your average 12 oz. glass of Irish red to contain 190 calories and 19 grams of carbs. That’s a bit steeper than your average beer, which contains 150 calories and 13 grams of carbs, but Irish red is smarter than the average bear (or beer, for that matter). It’s got a balanced, malty body that’s surprisingly light given its color and rich flavor profile. Its red color comes from roasted barley and kilned malts, which are also responsible for that little blast of carbs, but which can be forgiven since they provide notes of toffee, caramel and butter.
Enter a delivery address