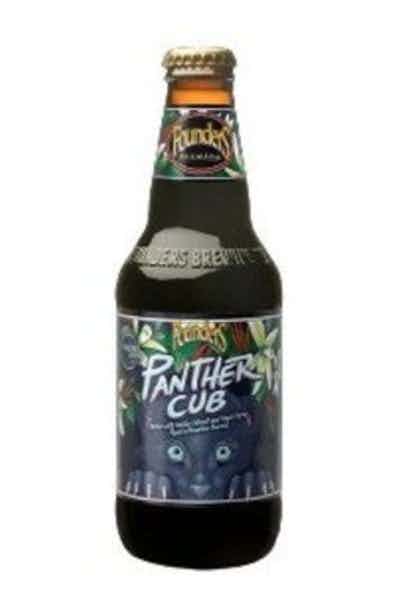 A robust porter, Panther Cub is aged in the finest bourbon barrels available along with a kiss of maple syrup and vanilla extract. The aroma of maple and vanilla notes combine with a surprisingly deep character to make this rare creature one to gaze upon fondly. Don’t let it fool you, this kitty has claws.

Porters are often considered the same as stouts, but the two (while definitely related) are technically different brews, with porters characterized as lighter and chocolaty, whereas stouts are typically heavier and more coffee-inspired. Imperial versions of a porter share that same distinct chocolate profile but include an increased presence of roasted barley, lending to their super dark, often black color and cranked up ABV. Classic Imperial porters are similar to creamy, sweet Baltic porters, but U.S. brewers have veered slightly from tradition to create a uniquely American version, which features a hefty blend of dark malts but very little roasted or burnt flavor.
Imperial porters, like all porters, feature sweeter flavors like caramel, toffee and cocoa, and the increased ABV in the Imperial style contributes a hefty dose of malt with each sip. While this sounds undeniably heavy (and ideal for nights in cozy, winter sweaters), brewers check the sugary profile with a careful balance of hops, usually a bright and bitter American version. Imperial porters are often served in a tulip-shaped glass, which allows the drinker to experience the dessert-like aroma; porters, in general, shouldn’t be served too cold (the recommended temperature is 55 degrees Fahrenheit), which helps enhance the complex flavor.
While a standard English porter’s alcohol content is a surprisingly low 5%, the Imperial porter is often somewhere between 7-12%. Like other styles of beer that fall into the Imperial category, brewers usually double the recipe, meaning there’s even more sugary malt on which the yeasts can feed and ferment — leading to that extra boozy final product. Imperial porters, along with other dark robust brews like Imperial Russian stouts and Belgian quadrupels, are often “cellared” or aged for several months in a cool, dark place (i.e., your basement), a technique that assists in reducing the alcohol notes in the otherwise boozy beers.
Imperial porter recipes feature darker blends of malt, which are almost always a product of roasted barley; these base ingredients are essential for the style’s color and malted taste. Porters, in general, don’t often include wheat (the ultimate gluten villain), but barley is still not considered a gluten-free grain, meaning traditional Imperial porters wouldn’t be safe for those with gluten intolerance. There aren’t many widely distributed gluten-safe porters, though there are some small-scale breweries dedicated to the task; these gluten-free mavericks often lean on dark malts from gluten-safe grains (like rice and buckwheat) which helps maintain the Imperial porter’s rich color.
Anything prefaced by the word “Imperial” is likely going to deliver on indulgence; accordingly, a 12-ounce serving of Imperial porter is roughly 270 calories and 18-20 grams of carbohydrates — it’s like eating a small piece of chocolate cake (hold the frosting). Calorie counts increase dramatically alongside alcohol content, so whenever you’re choosing a beer like an Imperial porter or similar heavy brew, it’s not surprising to find it contains such high nutritional values. Imperial porters are often served seasonally, especially around the holidays when you can sip them casually around the fireplace (a boozy porter for you and hot chocolate for the kids).
Enter a delivery address