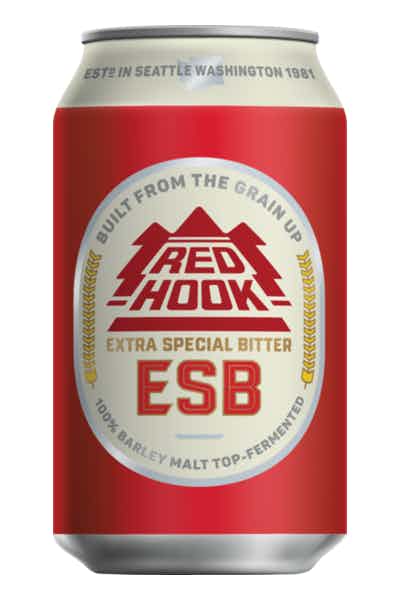 Redhook ESB is modeled after the premium Extra Special Bitters found in English pubs. Brewed since 1987 this full-bodied amber ale is Redhook's signature brew with its toasted malt flavor and pleasant finishing sweetness. Its eminently drinkable style has established Redhook ESB as a benchmark brew in the amber ale category.

British pubgoers tend to have slang terms for all kinds of food and drinks: “bangers” are sausages, a “chippy” is a fish and chips establishment, “rocket” is arugula and “crisps” are potato chips. The habit extends to their nicknames for beers; if you order a bitter at an English pub, you can expect a pint of standard English pale ale, a golden brew with lightly toasted malt and a nice dose of floral, bitter English hops. ESB — or Extra Special Bitter — is arguably the same as any classic pale ale, though you might find a slightly higher IBU for brews within the ESB category.
The original English pale ale has roots in a town called Burton-on-Trent, where Bass Brewing Company has continued crafting its incredibly popular pale ale since the late 18th century. The secret recipe combined the high-sulfite water in the region (which helps enhance a beer’s flavor and crispness), the newly invented pale malts, traditional English ale yeasts and floral U.K. hops. The final product — whether bottled as a pale ale or served in the pub as a bitter — ranges from golden to copper and delivers a super well-balanced, approachable beer, featuring a medium amount of bitter hops alongside the warm caramel and nut flavors from the pale malt.
While all three terms generally describe the same category, the alcohol content varies slightly: a standard bitter pint is closer to 3-4% ABV while an ESB is more likely 5% (sometimes even 6%) ABV. Pale ales are on the lighter side of the ale family, with many of its cousins — like IPAs and the extra boozy imperial styles — pushing 6-8%. Bitters, pale ales and ESBs are designed for a balanced flavor that pairs well with pub-style fare (especially salty chips and vinegar); they’re humble and easy to drink, a refreshing contrast to the indulgent high-gravity brews so popular in the modern craft beer industry.
English pale ales traditionally use an English pale malt— an ingredient that creates the beer’s signature pale golden color and caramel flavors; pale malt comes from predominantly barley, a grain that, while not as glutinous as wheat, still contains enough gluten to be considered unsafe for those with Celiac Disease or other sensitivities. Luckily, the demand for gluten-safe brews is inspiring larger brands to tackle the problem, using gluten-safe grains (like sorghum, rice and buckwheat) and leaning on naturally gluten-free ingredients (like roasted nuts) to create a similar product. Luckily, hops, which ultimately create the signature bitter experience in a pale ale, are gluten-free.
English pale ales or bitters share some of the characteristics of a lager, especially their lighter color and brighter finish, but the style is undeniably an ale. You might not know how an ale differs from a lager, but there is a key underlying ingredient that differs from the otherwise similar recipes: yeast. Yeasts in ale behave differently from those in lagers and are the original strains used in British beers, as lager yeasts didn’t arrive until much later when British explorers brought the species back to the UK following their voyages to South America.
English pale ales or bitters or ESBs — whatever you’re local brewpub calls them — all fall into the general pale ale category; most pale ales contain about 150-180 calories and 14-16 grams of carbohydrates. While pale ales are certainly not considered a “light” beer concerning nutritional content, they’re no doubt a more reasonable choice than IPAs (which often top 200+ calories) while still delivering the tasty bitterness from the hops. Enjoying a few pints of traditional bitters at your local pub won’t leave you feeling too full (though the large plates of fried fish and french fries are another story).
Enter a delivery address