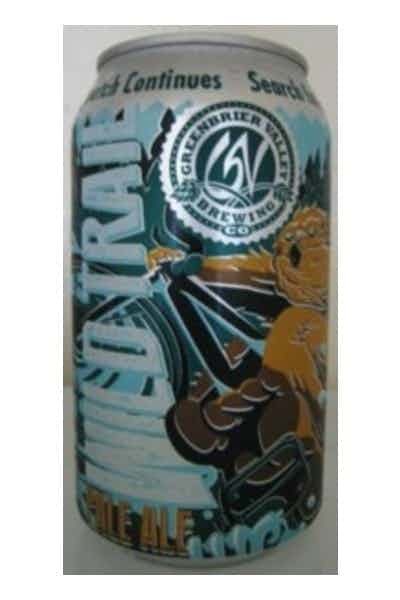 The Wild Trail Pale Ale is a medium bodied golden-amber ale. Featuring the choicest hops from the Pacific Northwest; lending to a robust mango, tangerine, and piney flavor. As well as dry hopped to add a slight floral and hoppy note. The robust hops are balanced by a blend of British floor malted barley and American 2-row. At a moderate 5.7% abv and 44 IBU’s, this is a flavorful, American Pale Ale. Enjoy at home or after an adventure on one of West Virginia’s wild trails.

Pale ales became popular in the 18th century thanks to innovative brewers employing a new, lighter roasted malt in their recipes; this state-of-the-art, paler brew completely redefined the beer industry, spawning all kinds of tasty variations, including the beloved India pale ale. American brewers decided to recreate the British version but replaced the milder UK hops with the bright, pungent American varieties from the Pacific Northwest. American pale ales (APAs) today are a widely distributed, popular style of beer that is characterized by a light-to-medium amber color and a delicious balance of malt and hops that appeals to most palates.
American pale ales taste similar to popular West Coast India pale ales in that they feature bright notes of citrus fruit and their signature, pungent PNW hops — an ingredient that contributes a tasty bitterness and refreshing pine flavor. However, pale ales differ in that they retain a distinct maltiness as well, a gentle sweetness that’s often lost in the standard IPAs in today’s market and ultimately mellows out the overall product. Because of its well-balanced alchemy, you’ll find that American pale ales are an easy match for all kinds of foods, especially those befitting your all-American diets, like red meat and apple pie.
An American pale ale tends to contain a slightly lower ABV than its cousin, the hopped-up India pale ale; in general, the alcohol content in a standard APA falls between 4.5%-5.5%, leaving very little alcohol to the taste but plenty of flavors. APAs are still a member of the ale family, which generally lean on the more alcoholic side, but the American pale ale is an undeniably easy-to-drink, well-balanced beer. For those who haven’t quite jumped on the IPA bandwagon, the APA provides a gateway into the heavily-hopped, citrus craze while still delivering some sweetness (and without delivering the super high ABVs).
American pale ales are not by default gluten-free — ales, in general, contain quite a lot of gluten — but several breweries are mastering a gluten-free or gluten-reduced version; even New Belgium Brewing Company is taking a stab at a gluten-free pale ale. Gluten-free pale ales aren’t too difficult to mimic, thanks to the overwhelming flavor that Pacific Northwest hops provide, allowing brewers to employ naturally gluten-free grains in their mash (like sorghum and rice). However, some brands use an enzyme instead that breaks down the gluten in a traditional American pale ale, leading to a gluten-safe (if not totally gluten-free) product.
As the name suggests, the American pale ale is a form of ale rather than a lager; the APA contains a simple recipe of pale, toasted malt for sweetness, bright, bitter hops for bitterness and the secret ingredient: a classic ale yeast. This yeast variety behaves differently than the yeast strains used in lagers — ale-specific yeasts help establish the characteristics that make an ale so distinctive. Ale yeasts float at the top of the warm, sugary wort (the name for the liquid that results from the boiled grain mash), which leads to brews with higher alcohol content and generally sweeter flavor.
In the world of hop-forward brews, the American pale ale is on the lighter side regarding its nutritional content: generally, 150-200 calories for a 12-ounce pour (though it really depends on the individual brand’s ABV). One of the best-recognized versions, Sierra Nevada Brewing Company’s Pale Ale, clocks in at 180 calories and 15 grams of carbohydrates. Despite its reasonable calorie count, American pale ales pack a lot of flavors, including toasted malt, citrus fruits and pine, so this brew is an excellent compromise for those seeking something less hefty than the standard India pale ales flooding the market.
Enter a delivery address