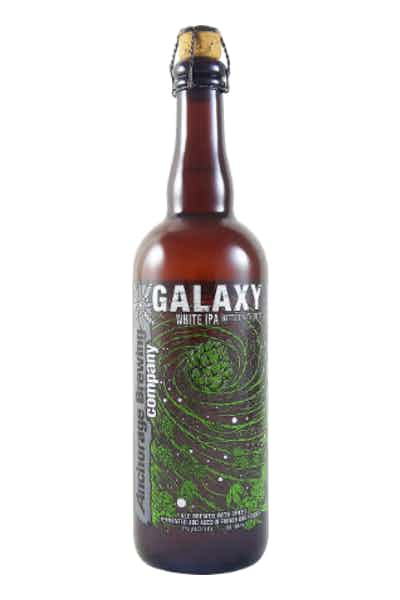 One of the new trails being blazed on the frontier of beer is the style known as White India Pale Ales. Galaxy White IPA represents a significant new landmark on that trail. With its use of fresh kumquats, Indian coriander, and black peppercorns, Galaxy pays homage to the early explorers, who sailed unknown seas in search of rare spices and exotic fruits. Captain Cook travelled from Australia to Alaska, and so have the Galaxy hops used to create this adventurous brew. Just as a true explorer never stands still, the presence of brettanomyces guarantees that Galaxy White IPA will keep evolving in the bottle for years to come.

The white IPA is a combination of two popular styles of beer: the bright, hoppy American India Pale Ale and the spiced, refreshing Belgian witbier. In 2010, two distinct breweries collaborated to develop their carefully crafted beer-child; Deschutes Brewery (an IPA powerhouse in the Pacific Northwest) and Boulevard Brewing (a Midwestern staple known for its Belgian-style pours) played with flavors that complemented both beer categories, like lemongrass and orange peel. The result, the white IPA, was light yet bitter and gently spiced concoction; the Beer Judge Certification Program officially recognized the white IPA as its own style of beer in 2015.
If you were to draw a Venn diagram of shared flavors between a standard American IPA and a Belgian witbier, you might be surprised how much overlap the two distinct beer styles share: citrus fruits, stonefruits like apricots, warm spices like clove and coriander, aromatics like lemongrass and sage. white IPAs can carry a lot of complex flavor without overwhelming your palette; it finishes almost like a crisp lager rather than a pumpkin-spiced latte. Belgian witbiers generally rely on a 50/50 combination of Pilsner malt and a distinctly unmalted wheat grain; the unique blend helps achieve the white IPAs lighter body and refreshing drinkability, whereas malted wheat tends to over-deliver on sweetness.
The alcohol content in a white IPA is comparable, if not slightly lower, than a standard American IPA; as such, a white IPA’s ABV falls somewhere between 5.5% and 7%, though there are some double white IPAs on the market that surpass 8% ABV. The White IPA is a combination of the spiced, Belgian-style witbier (Dutch for “white beer”) and the bright, piney notes in an IPA, blending mellow wheat with hops from the Pacific Northwest. Most Belgian white ales fall between 4-5% ABV, whereas an IPA is closer to 6-8%, hence the White IPA’s Goldilocks-like balance between the two.
White IPAs are not inherently gluten-free, and it’s a tall order to track down a brewery that’s up to the task of creating a gluten-safe alternative; the unmalted wheat grain in the white IPA’s wort contributes to the brew’s overall feel and flavor — and wheat products are simply packed with gluten molecules. However, thanks to science, there are a few brewers committed to creating a gluten-reduced white IPA option, most using a specific enzyme in their recipes that help strip the gluten molecules from the final product. While super limited, some brewers attempt a bit of alchemy and rely instead on entirely gluten-free grains to create a White IPA.
White IPAs, while surprisingly refreshing and light like a lager, are a part of the ale family of beer (along with its other IPA cousins). To create a white IPA, brewers rely on ale-specific yeast strains, which ferment at warmer temperatures and tolerate a more alcoholic environment; the ale yeasts help deliver the final product’s richer flavor, with notes of dark fruit and spice. The thinner, overall quality of a White IPA compared to other IPA styles is due to the unmalted wheat used in the wort, which lacks the characteristic sweetness so often associated with heavy beers, especially Belgian-style ales.
Generally speaking, as alcohol content increases in beer, so then does the calorie count; white IPAs, accordingly, have a slightly higher count than a standard American Pale Ale or Belgian White Ale (150 calories for a 12-ounce pour) but don’t quite reach the range of a typical IPA (200 calories for a 12-ounce pour). A standard white IPA will likely clock in around 170 calories and about 15 grams of carbohydrates for a 12-ounce bottle. white IPAs are an ideal balance between light ales and heavier brews, delivering a mellow drinkability of a witbier without compromising on the hops and citrus flavor you crave from an IPA.
Enter a delivery address