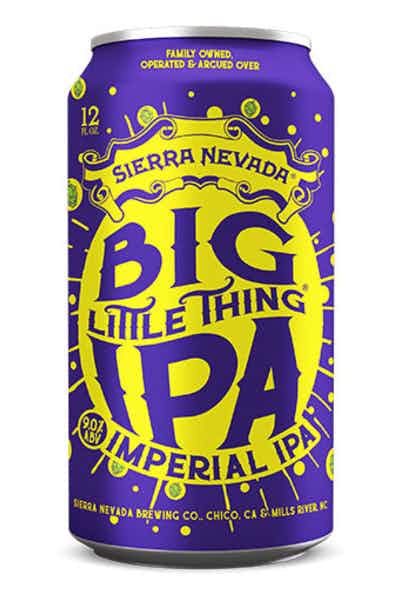 Big Little Thing defies brewing logic. A monster ABV and booming hop character, but tame sweetness and a clean finish? This anomaly of imperial IPA starts with the mash. More than just using a huge volume of malt (and we do fill our mill to overflowing), we mash our grain aggressively to yield a higher ratio of fermentable vs. unfermentable sugars. This allows yeast to metabolize nearly all sugar, which both boosts the ABV to 9% and cuts the malt sweetness. At the same time, yeast and hops collaborate on their own magic. Dry hopping during active fermentation sparks biotransformation: yeast cells alter the chemical compounds in hops to unlock entirely new aromas—like the tropical wave that washes over Big Little Thing.

The Imperial IPA is designed for IPA lovers who crave even more of that bitter kick and rich flavor; Imperial IPA (also called Double IPA) recipes tend to double the normal amount of hops, delivering high gravity brews with equally inflated IBUs (International Bitterness Units). You can thank American brewers for this distinctive style — the U.S. craft beer industry tends to push boundaries and break from tradition, and well-known Russian River Brewing is credited with inventing the indulgent style, winning several awards with their release of Pliny the Elder Double IPA. Today, most well-known craft breweries offer several takes on the Double IPA, carefully balancing the sweet, toasted malt with a whopping amount of hops.
While often surpassing an 8% ABV, Imperial or Double IPAs lack the malty notes and general sweetness associated with other high-alcohol styles; instead, the overwhelming amount of hops in the recipe lends to the final product’s substantial bitterness and bright finish. To achieve the Imperial IPA’s distinct flavor, brewers will add double or sometimes triple the number of hops they’d typically use for a standard American IPA. Double IPAs are often served in a tulip-shaped glass, much like a Belgian tripel or equally boozy pour — the stemware’s elegant lip allows you to appreciate the impressive aroma, much like you would a glass of wine.
To craft an Imperial IPA, there is no minimum threshold for its alcohol content, though you’ll likely find a range between 6-10% ABV with some triple IPA varieties pushing 12%. The quintessential foundation of an Imperial IPA is its overwhelming amount of hops; most brewers double their hop blends in the recipe, which contributes to the final product’s signature bitterness. However, it’s a balancing act —to deliver such a high IBU, the recipe must include a corresponding increase in malt grains; the malt contributes the sugars to the IPA’s fermentation process, which consequently leads to higher alcohol content.
To achieve a truly gluten-free beer, brewers need to employ gluten-free grains (such as quinoa, millet or buckwheat) and abstain from using any other traditional gluten grains (like wheat or barley) in their facility to avoid cross-contamination; understandably, this is a tall order for craft brewers trying to balance the already complex flavors in an Imperial IPA. However, because an IPA-style beer relies more on bitter hops and other creative flavors (like citrus and pine) rather than the toasted sweetness of the malt grains, there are some successful gluten-free Imperial IPAs on the market. You’ll be pleasantly surprised by the millet and sorghum-based brews, though it may be tough to track them down.
Whether a standard, hazy, double or triple-style brew, any IPA variation is considered an ale and not a lager; the fundamental difference lies in the strains of yeasts used in the fermentation process. While both ales and lagers use malt grains, yeast, water and hops in the recipe, ale yeasts thrive in warmer environments, leading to the generally higher alcohol content in the final brews. Ales, like the boozy and bitter Imperial India Pale Ale, rely on a top fermentation method by which the yeasts remain at the top of the malty, sweet wort, whereas lager yeasts sink to the bottom and require a longer process.
Imperial/Double IPA recipes double and sometimes triple the number of hops in the brew, compelling craft beer makers to add an equivalent dose of malted grains to balance out the harsh bitterness. Accordingly, the final nutritional counts are significant, especially with many Imperials IPAs delivering a 7-10% ABV; higher alcohol content means more calories after all. While the counts can range dramatically depending on the alcohol content, a 12-ounce serving of an Imperial IPA with an 8-9% ABV will likely clock in between 250-300 calories and roughly 15-20 grams of carbohydrates — it’s the type of beer you’ll want to take your time with.
Enter a delivery address