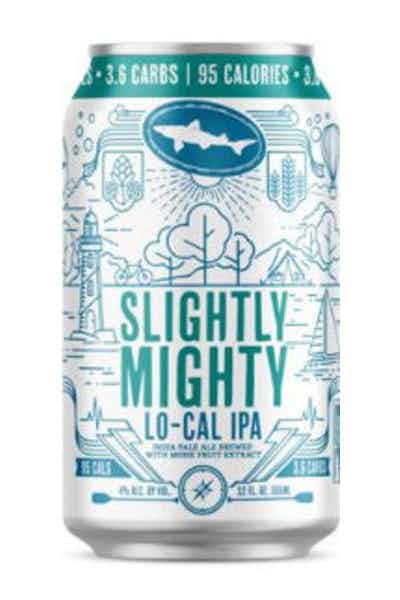 Mighty hop character and just 95 calories... that can’t be possible. Oh, but it is! After a year of R&D and months of fine-tuning what seemed to be unimaginable, Slightly Mighty is finally here! This true indie craft beer has all the character of a world class IPA, but with only 95 calories, 3.6g carbs, 1g protein and 0g fat per 12oz serving. Seriously.

A standard ale is a malty, mildly bitter style of beer that can trace its roots for thousands of years; the more modern style coincides with the Middle Ages when hops were thankfully introduced to the brewing process. Ale recipes use a quick-acting style of yeast that floats at the top of the brewing vessel; fermentation occurs at a balmy 70 degrees Fahrenheit, leading to the style’s signature sweet flavor and subsequent higher ABVs. A basic ale is fruity, slightly bitter and generally darker in color, though there are dozens and dozens of distinct styles of beer that qualify as an ale.
Because ales yeasts ferment at a higher temperature and create more alcoholic conditions, ales are typically darker in color than lagers and lean towards a sweeter, maltier flavor. It depends on the sort of ale you’ve selected, however, as there are over 75 unique types of ale; a pale ale tends to be more bitter and dry, a brown ale delivers a toasted nut and caramel taste, a sour ale is tart and funky and an IPA is bold and hoppy. Many traditional, European-style ales are best described as fruit-forward, warm and even a little spicy, delivering an undeniably rich tasting experience, especially the darker, robust varieties.
Ales are more alcoholic than lagers, largely due to the style of yeast and the temperature at which the yeasts ferment; ale yeasts tolerate a more alcoholic environment and thus provide a darker, richer product. A standard pub-style pale ale or basic brown ale will generally clock in around 5% ABV, though, with dozens of different styles in today’s crowded craft beer market, you can easily find a pint that packs more of a punch. IPAs, the darling of the craft brewing industry, will typically range from 6-8%, and the popular trend towards double and triple-style versions pushes these well over 10% ABV.
Beer, by definition is crafted from cereal grains (very few of which are gluten-safe) and as such, ale is not a gluten-free product; on the beer spectrum, lagers and stouts tend to contain less gluten than ales which rely on the barley and wheat malt to deliver its distinctive sweetness. Some brewers are experimenting with more gluten-safe grains, like sorghum or rice, and others are introducing an enzyme that helps remove the gluten molecules from the final products. Household names like New Belgium Brewing Company and Stone Brewing offer gluten-safe pale ales and even IPAs, though even then, you’re not guaranteed an 100% gluten-free product.
While a rhetorical question no doubt (an ale is, in fact, an ale after all), you might not know what exactly marks the difference between the two fundamental beer styles; it all comes down to the yeasts employed and the fermentation process. The process by which ales are made is much older than that of lagers, as lager yeasts originally came from South America and thus did not enter European markets for some time. Ales rely on top-fermenting yeast strains, which, as the name suggests, remain on top of the warm wort while feeding on sugars, whereas lager yeasts sink to the bottom and ferment at much colder temperatures.
Ales, especially IPAs and Belgian-style ales, tend to be higher in alcohol than other beers, so you’re likely to consume more calories and carbs per pint. A basic, 5% ABV, 12-ounce bottle of pale ale contains around 150 calories and 13 grams of carbohydrates; a common IPA (say, a Lagunitas) is closer to 190 calories and 19 grams of carbs; a glass of dark Belgian-style ale might even surpass 300 and 30 grams of carbs. Ales tend to deliver a richer, maltier taste and often appear as darker shades of ambers and toasted browns — these qualities coincide with a higher calorie count.
Enter a delivery address