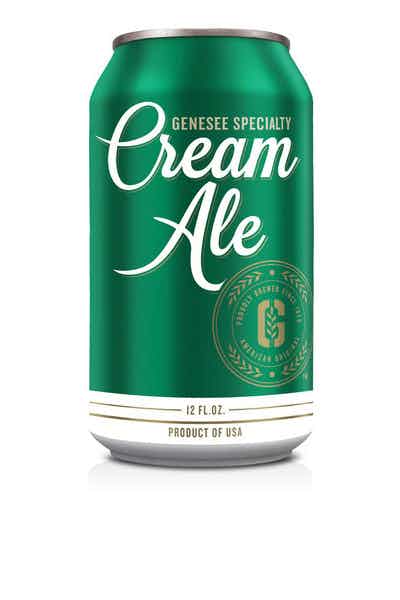 Smooth like a lager. Crisp like an ale. Cream Ale was one of the first styles created in America, and ours has set the standard since 1960. Our Cream Ale has won numbers awards throughout the years and remains just as smooth and flavorful today as it has always been. A true American original.

Cream ale is an American beer style that’s light in color, dry and sports a higher ABV than regular beers. But perhaps it’s important to point out what cream ale ISN’T: It is not made with cream, and though it’s called an ale, it’s actually made with lager yeast. Don’t let its deceptive name fool you, though — cream ale is ridiculously delicious and has better flavor than your average brew. Its makers like to lighten it by adding things like corn, rice, wheat or sugar in place of barley. The result is an ale that goes down like a lager.
Cream ale is dry, clean and has a low hop bitterness, making it an extremely approachable beer for those who aren’t a fan of the mouth-puckering bitterness of many other ales. Instead, cream ale is faintly sweet — and though it doesn’t have an iota of cream in it, it is smooth as butter and can have a gentle corn flavor. Its maltiness tends to be moderate. In fact, “moderate” is a great overall way to think of cream ale: It’s more interesting than your standard lager but still has a mild flavor impact.
Cream ale sports a low-moderate alcohol content, generally between 4.2% and 5.6% alcohol by volume (ABV). This makes it fairly similar to other ales from across the pond like Irish red ale or English brown ale. Cream ale has a delightful mouthfeel and is low on bitterness, letting its alcohol content play a generous role in shaping its flavor profile.
Cream ale is traditionally not gluten-free. However, some brewers (and homebrewers) are beginning to experiment with making gluten-free cream ale offerings. Interestingly, cream ale does feature gluten-free adjuncts like corn, sugar and rice that give it its characteristic light flavor and color, but the beer itself is not free of gluten. Traditionally, all ales are made using malted barley, which is heavy on the gluten.
On name value alone, cream ale pulls a couple of quick ones on you — it has no cream in it, and it’s not strictly an ale. Consider that ales undergo warmer fermentation, typically in temperatures ranging from 60°F to 70°F, while lagers require colder temperatures between 35°F and 50°F for their fermentation. Cream ale is made using lager yeast fermented in warm temperatures but is then conditioned in cold temperatures. This makes cream ale a sort of ale-lager hybrid, and a delicious one at that.
A cream ale sounds like it would be fairly extravagant in terms of calories and carbs, but this isn’t the case: Your average cream ale beer will pack around 150 calories and 19 grams of carbohydrates. That’s right on par with an average glass of beer in terms of calories and a bit higher in terms of carbs — normal beer contains about 13 g of carbs in a 12 oz. serving. The payoff, though, is in cream ale’s silky, dry flavor and delightful finish.

On the nose, this beer smells sweet and corn-like. It displays a creamy white head with significant effervescence, giving it a fresh effect on the palate. With sparkling clarity and light corny flavor, this beer is dry and mildly sweet. It pairs well with a variety of dishes, including grilled meats and spicy cuisines like Thai or Indian. Shop cream ales on Drizly. Find us in your city, or look for liquor stores on Drizly near you.