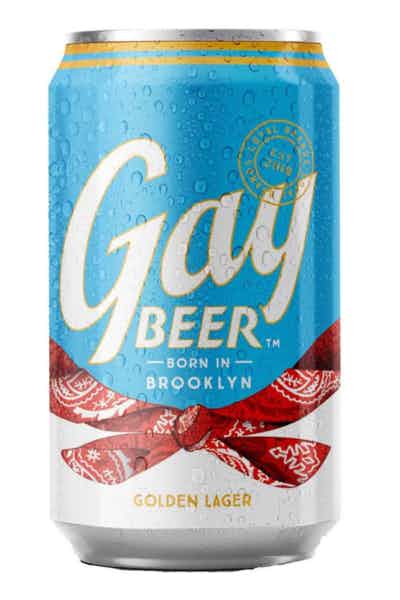 Gay Beer is an easy-drinking golden lager made with a unique combination of malt grains and German hops. The custom blend produces a craft brew with subtle notes of honey, crisp citrus and a malt finish. The concept is simple. Be happy, drink Gay Beer.

Golden/blonde ale is an approachable, delicious beer that ticks all the boxes: it’s flavorful, relatively healthy, gorgeous to look at, refreshing and not too strong on flavors like hops or malt. That makes it a great choice for those moments when you simply want to “grab a beer” and relax — and with plenty of different flavors like spices, fruit, honey and hoppy bitterness to choose from in different brands, you’ll never grow tired of deep-diving into the golden/blonde world. Either lager or ale yeast can be used to make golden/blonde ale, which further adds to the flavor opportunities.
The prevailing flavors of golden/blonde ale are a delicious graininess and bready flavor. They’re also sweet and can be fruity thanks to the type of yeast used, though this is balanced by a light hoppy bitterness. Ales tend to have fuller bodies than lagers, and though golden/blonde ale is no exception to this rule, it does not have the filling effect of many other ales. Instead, its lower calorie and carb counts make it a great choice when you want a bready beer without the filling effect.
You can expect your average golden/blonde ale to pack an ABV rating of 4.8%. The reason for this alcohol rating is a historical one. During the first half of the 20th century, World War I and World War II had each radically changed the beer industry. In 1915, in the thick of the first World War, British Parliament signed the Defense of the Realm Act into law. This law required beer to be produced at lower alcohol levels to ensure English workers weren’t partying too hard to produce war munitions. At the same time, many of the ingredients used to make darker ales came from Germany and became difficult to source. As a result, lower-alcohol, paler beers became increasingly popular until they became the norm.
Traditionally, golden/blonde ale is not gluten-free as it’s made using malt. However, thanks to modern beer-making innovations, you can enjoy gluten-free golden/blonde ales from several different makers. One of these is Ultimate Light Golden Ale by Omission, which is a smooth ale that goes down easy and packs a flavorful punch. Think plenty of hoppy citruses and a clean finish. Better yet, this gluten-free option packs only 99 calories and 3 grams of carbs, so it won’t fill you up like many of its gluten-happy alternatives.
Golden/blonde ale is indeed an ale, though it’s sometimes fermented using lager yeasts. Being an ale means it is produced using a different method from that of lagers: ales are made using warm temperatures between 60° and 70°F with top-fermenting yeast, which imparts a fuller body and a sweet, fruity flavor. By contrast, lagers are made using bottom-fermenting yeast in cooler temperatures — usually between 35°F and 50°F. As a result, they tend to have a crisp, refreshing bite that’s clean and sharp. Brewmasters will often add things like malts and hops for additional flavor.
You can expect your average golden/blonde ale to contain 107 calories and 2 grams of carbohydrates for a 12 oz. serving. For comparison, a regular beer usually weighs in a bit heavier at 150 calories and 13 grams of carbohydrates. Those are pretty significant savings in both, particularly in carbs. You get to enjoy a beer with a bready, grainy flavor that’s also got some delightful sweet notes to it — all for a lower calorie/carb price.

Crafted to remove gluten, Gay Beer™ Golden Lager is a light-bodied brew. It includes Vienna malt, which gives this drink a rich yellow color and imparts a toasty aroma. This beer also features Mandarina hops, lending a bright, citrusy flavor with notes of tangerines, mandarin oranges and clementine. The custom blend of grains and hops results in a golden lager beer that's crisp with subtle notes of honey and a malt finish.

Brewed in Brooklyn, this easy-drinking lager contains 5% ABV. Since this beer is crisp and light, it complements lightly seasoned foods like herb-crusted salmon baked with lemon or a roasted chicken finished with a citrus glaze. The bright profile of this American lager beer has a palate-cleansing action, so it's nice to serve in between courses. Share this lager with friends and family by clicking these links to search for Drizly in your city and look for liquor stores on Drizly near you.