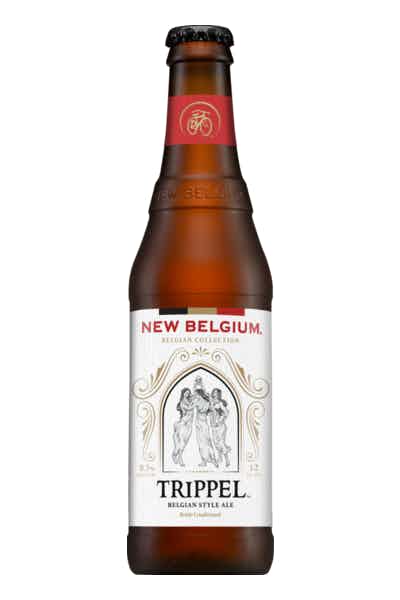 2021 GABF Gold Winner! Our Trippel has always been a big, beautiful Belgian-style ale. This golden beer opens with a bold blast of spicy Noble hops, courtesy of Saaz and Hallertau Mittlefruh, and gives way to the fruity aromas offered by our traditional Belgian yeast. Brewed with Pilsner and Munich malts, Trippel is classically smooth and complex, and sings with a high-note of sweet citrus before a pleasantly dry finish delivers a warm, strong boozy bite. Give Trippel a sip to get you smiling.

In the mid-19th century, Belgian monks began increasing the alcohol content in their popular monastery-based brews, crafting a dubbel, tripel and even quadrupel strength version on their abbey ales. It should be noted, however, that the recipe adjustments led to more than a variation in ABV; while the dark and toasty dubbel brew is coffee-colored and drinks like a heavy brown ale, the tripel is lighter in color, with a strong hoppy flavor more akin to an IPA. Tripels generally range from 8-10% ABV and are often served in a tulip-shaped glass, allowing you to better appreciate the aroma as you slowly sip this boozy ale.
Tripels are a lighter, honey-colored beer compared to other abbey-brewed ales, though don’t be fooled by the brighter hues; tripels are one of the stronger Belgian-style ales, often reaching 10% ABV. Accordingly, you’ll likely notice an alcoholic aroma from your glass, but the taste is not at all astringent — you can expect a flavor similar to a traditional golden Belgian ale with a mild bitterness from the hops and a delicate sweetness from the malts (in the case of a tripel, it’s generally a Pilsner malt). Tripels are extra bubbly and provide a similar drinking experience as a strong IPA.
As the naming convention suggests, a tripel Belgian ale has a higher ABV than the dubbel, but less alcohol than the super-strong quadrupel; historically, tripels were the most alcoholic brews that the Belgian monks crafted in their storied monasteries/craft brew houses. Inspired to push boundaries, modern-day brewers began releasing quadrupels in the 1990s (with some reaching upwards of 14% ABV) — nonetheless, tripels are not to be taken lightly, as most of these honey-colored brews tend to range in ABV from 8-10%, rivaling imperial IPAs. Most Belgian ales tend to have a higher ABV than their European counterparts, largely due to the increased malt and sugar used in their recipes.
Unfortunately for those with gluten sensitivities or Celiac disease, Belgian-style beers, like the tripel, are not gluten-free; the traditional ingredients used to create the wort (the sugary liquid that results from the mashed and boiled grains) are inherently full of gluten and the final product maintains a large number of gluten molecules throughout the fermentation process. Ales, in general, contain a higher amount of gluten than other styles of beer and Belgian ales in particular rely on the malt from barley and wheat to cultivate their signature flavors. While some brewers are experimenting with low-gluten grains and gluten-reducing techniques, it’s very unlikely you’ll find a completely gluten-free tripel.
A tripel is a Belgian-style ale, an abbey-style beer crafted using a top fermentation method; top fermentation describes a process by which brewers (for tripels, brewers were historically Belgian monks) add yeast to the top of the boiled grain mash. Conversely, lagers employ a bottom fermentation process, which requires a different strain of yeast that’s able to thrive at cooler temperatures — interestingly, European traders brought the lager-style yeast back with them from South American expeditions. Most Belgian-style beers are considered ales, which tend to have a higher alcohol content than lagers, in large part because of the warmer fermentation process.
Tripel ales have a pretty high alcohol content, and as such, tend to include a hefty sticker price in regards to their calories and carbohydrates; in general, Belgian-style ales have a higher ABV than other types of beer and the tripel, with its fruity body and honey-like finish is no exception. With an average ABV between 8-10%, a 12-ounce tulip-shaped glass of tripel ale contains about 200 to 250 calories and 20 grams of carbohydrates — it’s similar in calories to a pint of dark stout, like a Guinness. A tripel’s calorie count is undeniably deceiving when you consider its easy drinkability and lighter color.
Enter a delivery address