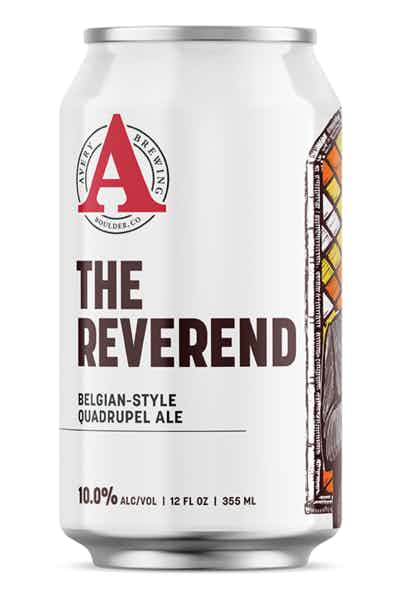 Inspired by the Trappist brewers of Belgium, a Quadrupel is a modern Belgian-style ale of greater strength compared to its Dubble and Tripel sister styles. Typically a darker brew, Quads are full-bodied with a rich and malty core. As with all Belgian beers, the yeast is what really sets this style apart, adding a fruity and spicy edge. The Reverend was created as a tribute to the life of our friend's late grandfather, an ordained Episcopal Reverend. True to his spirit and character, this beer is strong-willed, assertive, and pure of heart.

A Belgian quadrupel (or quad) is a type of Belgian Strong Ale with an impressive ABV and medieval European roots; seriously, Catholic monks were well-regarded brewers in the Middle Ages, perfecting the recipes for rich, malty beers. The quadrupel itself did not emerge until the 1990s, and like so many European fads before it (nods to the Spice Girls), met a real appreciation from U.S. markets. Quadrupels are complex and tasty ales, though the flavor can vary from caramel to dried fruit to spice depending on the yeast strains and roasted malts added as well as the beer’s age; you’ll likely notice an alcohol taste as a consequence of the high ABV, so you’ll want to sip and savor your quad like a fine wine.
Quadrupel Belgian ales are notoriously rich in flavor, though the profiles can range from sweet and candied to a more robust spiciness. Brewers typically assign their quads an ABV between 8-14%, so your taste buds will likely perceive some wine-like qualities while sipping this style of ale; common flavors include dark dried fruits like dates, figs and plums alongside the rich caramel from the malt and gentle bitterness from the hops — a bit like a boozy bread pudding in a pint glass. Because of their uniquely rich profile, quadrupels are best paired with pungent cheeses (buttery goudas and tart blue cheeses).
Unsurprisingly, the quadrupel ale has one of the highest ABVs among its Belgian-style brethren — most quads fall comfortably into a 10-13% range, rivaling a glass of wine in alcohol content. The naming convention behind a quadrupel is a direct reflection of its ABV; Belgian dubbels are more like brown ales and frequently clock in at 5-7% while tripels rival IPAs in the 7-10% category. In general, Belgian-style ales are more alcoholic than other types of beer, in large part due to the volume of sugars used in the fermentation process, a trend that’s developed throughout the country’s epic beer-making heritage.
While gluten-free beers are increasingly popular in today’s market, Belgian-style ales like the boozy quadrupel are inherently not gluten-free; in fact, you’d be hard-pressed to find a gluten-free option. Quadrupels and other ales tend to contain significantly higher amounts of gluten than lagers and stouts — most beers contain barley malt or wheat malt (or both) in their grain-based wort, and while the mash is indeed boiled and processed before the final product is poured, the gluten molecules are still very much present. Some breweries are experimenting with gluten-free grains in their Belgian-style ales, employing rice-malt instead, though the resulting product is not as alcoholic or as flavorful as a true quadrupel.
A Quadrupel is a Belgian-style ale, a distinctly different type brew than its rival German lager; while both styles feature yeast, hops, water and malt, ales rely on a top fermentation process by which the yeast is added to the top of the boiled malt grains (or “wort” for you brewmasters). Yeast strains used in lagers can withstand colder temperatures, whereas the yeast species used in ales rely on the warmer environment — which lends to their higher alcohol content and robust flavor as well. While quadrupels are a relatively new phenomenon, the process for brewing ales is significantly older than that used for their milder lager cousins.
With their striking ABV between 8-14% and distinct dessert-like flavor, you shouldn’t be the least surprised at the average calorie count in a quadrupel Belgian-style ale; a 12-ounce glass will likely top 300 calories and 25 grams of carbohydrates — a similar serving of Guinness is barely half of that. The higher a brew’s alcohol content, the higher its calories, largely due to the increased sugars used to feed the yeast. As a consequence, high-ABV beers like a quadrupel deliver on the decadence, often featuring warm, indulgent flavors like caramel and dried fruit, akin to a dusky glass of red wine.
Enter a delivery address