Stout is a classic ale, but a modern hit. Pour a pint o’ Guinness or snifter of imperial stout as we shine a light on this darkest beer of all. 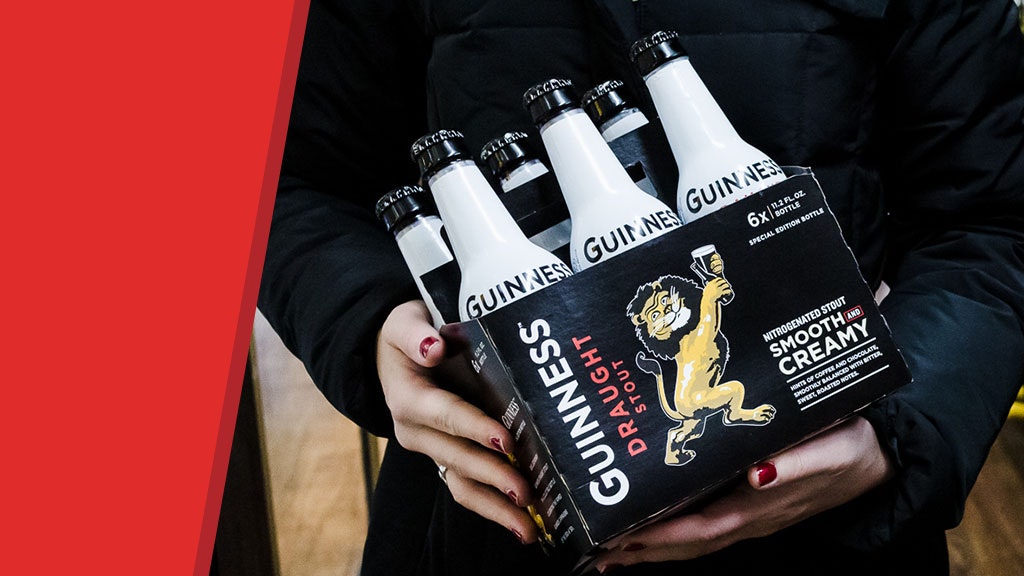 Stouts are an immovable rock in the turbulent, foamy sea of beer trends. They’re not going anywhere; they’re just too good. Stout is a supergroup of lovely dark beers ranging from your simple pub pint to an unreal 15% bourbon barrel aged behemoth. Which one are you drinking tonight? Let’s find out with our guide to stouts!

What makes a beer a stout?

Stout rules are straightforward but non-negotiable

1. You need some black (often roasted) malt for both flavor and color. Stouts don’t have to be completely black and opaque, but they have to be more black than brown. Otherwise you’re looking at a porter, guv’nah. If you hold a Guinness up to the light, you’ll see that it’s actually sort of a ruby/garnet color.
2. Stouts are ales, so you’ll need a warm fermentation with ale yeast. Ale yeast generally gives beer a fruitier flavor and aroma. Want to try a black lager? Try a schwarzbier; we’re not mad at you.

Richer, creamier stout evolved from the porters of 19th century London. Porters, with their luxurious malt bills, enjoyed huge popularity among the working classes in England’s industrial towns. The Irish piggybacked on that idea, adding darker and darker malts until they finally nailed it with roasted malt in the mid-20th century. Luck o’ the Irish had little to do with it; this was just hard work.

How many kinds of stouts are there?

Thirsty, are we? Stout is a flexible beer that’s more focused on a good time than strict guidelines, but today we’ll look at six popular styles:

Dry Irish stout is your everyday sessionable stout but significantly more: they’re the bedrock of your home pub. The best versions are light-bodied and low in ABV but still pack in a ton of roasty, toasty flavor. Enjoy it with a few mates on St. Patrick’s Day, but don’t bother trying to turn it green.

Here’s a non-controversial opinion: Guinness draught is really good. It’s a killer blend of roasty coffee and chocolate with a touch of tangy crispness. For a beer with an ABV similar to Bud Light (4.2%), there’s an ocean of flavor in there.

What’s the difference between Guinness and Murphy’s Irish stout?

As the standard bearers of the same Irish stout style, Guinness and Murphy’s aren’t wildly different - nor should they be. They’re both great beers resting on a silky bed of nitrogen bubbles. However, Murphy’s tends to be a touch sweeter than Guinness in our estimation. Maybe grab a bit of both and settle this old Irish feud yourself.

What’s the proper glassware for Guinness?

To drink as the Irish do, we highly recommend a 20 ounce imperial pint glass for your Irish stouts. These beers are light enough in both body and ABV to enjoy in a larger format.

What’s a good stout for food?

Irish extra stout doesn’t get the same screen time as dry stouts, which is a shame. This beer is indeed extra. It’s richer and more intense than dry stout, and pairs gorgeously with food. It’s got great notes of bittersweet dark chocolate, as well as coffee and vanilla in some brands. Guinness makes a really good one that pairs so well with classic Irish shepherd’s pie that you might never have one without the other. It’s also aces with pork dishes or beef stew.

What’s a good stout if you don’t like bitter beers?

Want an alternative to roasty Irish stouts? Sweet milk stout is your safe harbor. You can still expect hints of roast, chocolate and coffee, but the lactose layers of comforting richness and  fuller mouthfeel. Pilsner purists might scoff at the idea of a sweet beer, but many come around after a few sips. A good milk stout like Left Hand’s has just the right amount of complex stout flavor and sweetness; it makes for a super-satisfying nightcap, campfire beer or intro beer for your friends who “fear” craft beer. You may be wondering, “is there actually milk in milk stout?” The answer is not quite. Brewers use lactose, the sugar in milk, to sweeten milk stout. Using actual milk would ruin both the shelf-life and famous head retention of these beers.

Milk stout provides a great canvas for tons of other flavors, so look through this category carefully. You’ll find beers with mint, chocolate and even peanut butter additions. Don’t knock it, friends.

Even if your oatmeal knowledge starts and ends with instant oatmeal, you know that oats = CREAMY. Velvety and plush, oatmeal stouts are beer’s answer to the velour tracksuit. The signature oatmeal stout ferments in actual stones at Samuel Smith in England, and it’s a great blend of roast and calming creaminess. You may be wondering - wouldn’t oats add creaminess to other stouts? Oatmeal stout is its own category, but oats often make it into both American and imperial stouts. A good ingredient is a good ingredient. Oats are even starting to show up in hazy IPA recipes.

The rich american tradition of adding more malt and hops isn’t just for IPAs. We’ve done it with stouts, too, and can you blame us? When comparing American stouts vs. Irish stouts, American stouts are stronger - and often hoppier - than their irish counterparts. They also tend to experiment with more types of malt blends like caramel and biscuit. These create a more complex malt presence than just roast. Deschutes Brewing’s Obsidian Stout is a lush example of this flexible style, but don’t be afraid to order something local. We really love this beer’s malt/hop mind meld after a chilly winter walk.

Imperial stout is actually more popular than standard American stout. Why? Well, these big (8-12% ABV), strong ales are really getting after it. Brewers blend heaps of dark/caramel malts to create layers of caramel, familiar roast and creamy chocolate. For a recommendation on a good imperial stout, North Coast’s Old Rasputin will give you a great idea of the style, even if you have to turn the bottle around because Rasputin’s always STARING AT YOU. Enjoy this with rich chocolate desserts or dramatic series finales. Crack one open on game night, but stick to just one unless you really intend to lose.

Barrel-aged stouts have been drawing lines to breweries since Goose Island put Bourbon County Stout (>14% ABV) into some used Jim Beam barrels in 1992. Why the long lines? Powerful, luscious barrel-aged stouts transcend beer with flavors of bourbon, vanilla, chocolate fudge, wood and legions more. A good bottle can change your perspective on beer altogether. Break them out with close friends when you feel like they’ve really earned the good stuff. Looking for the best barrel-aged stout? There’s lots of great ones nowadays. Bourbon County Stout, full of bourbon/fudgy goodness, is still up there with the best. Firestone Walker’s Parabola is dizzyingly complex, with notes of fruit, dark chocolate and tobacco. Prairie Artisan Ale’s Bourbon Paradise adds extraordinary coconut flavor to complement its vanilla and chocolate notes. This is a bottle that you could use as a wedding gift.
Turns out there’s a stout for everyone. Do you fancy a pint of irish stout or a big imperial affair? Either way we’ve got you covered at Drizly!